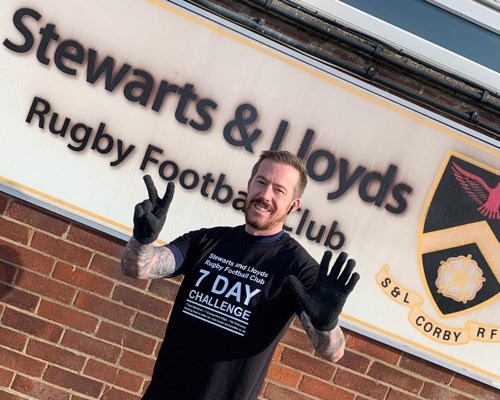 Last week, Nathan Hand undertook a huge challenge to complete 7 half marathons in 7
days! His reason for putting himself through this gruelling task? To raise money to help
make our club become more accessible to the wider community by providing a disabled lift
and disabled toilet facilities in a brand new clubhouse extension.

On the 7th February, Nathan set off for the first of the 7 half marathons which he would run
that week. During the preceding 7 days he had to endure driving snow, sub-zero
temperatures, freezing conditions under foot and a body that was screaming “no more”. But
despite the joys of a Corby winter and the personal extreme physical challenge it was game
on. Nathan not only conquered those challenges but excelled beyond his own personal
expectations, the stop watch telling no lies. No man is an island and Sir Edmund Hillary
didn’t climb Everest without the help of the Sherpas, so it has been very gratifying that
Nathan has been overwhelmed with offers of support from Club members and the wider
rugby community. Joined every day by friends and colleagues who ran or cycled alongside
part way. We spoke with Nathan after his gruelling week to ask him a few questions.

Hi Nathan, we hope you're feeling well after completing your incredible challenge last
week. What made you take up the challenge?
“I really wanted to do something positive for the club during these unprecedented times
with no rugby being played. We have the aspiration to make the club house fully accessible
and I wanted to offer up the idea of this fundraiser as my way of supporting that aspiration.
Community rugby has played a big part in my life and I want to do what I can to give back to
the community and the club.”

What made you choose to run 7 half marathons?
“I really wanted to do something big enough that it would catch people’s attention and
stand as something that would inspire people to donate towards our cause. I needed it to be
challenging enough for me personally as well. The 7 half marathons was actually inspired by
Sir Kev Sinfields recent MND fundraiser for Rob Burrow. Then during the early planning
discussions I realised it happened to fall during my sons 7th birthday and the start date
would also be the 7th. It just all fell into place and the 7 day challenge was born.”

How did you feel throughout?
“Tired and hungry mostly. Knowing why I was doing it made it easier though. I felt strong
physically and my legs and feet done me well. Having the support from everyone who joined
me, those who helped co-ordinate it, the local businesses who sponsored, and all of the kind
people who donated gave me a massive boost in motivation! It was an unbelievably
satisfying feeling finishing the final run, knowing what we had all accomplished for the club.
The other highlight for me was setting a new half marathon and 10k Pb, both set on my sons
birthday!

What's next?
"When the time is right, we will be looking to set the next challenge. Keeping with the idea of
a 7 Day Challenge and most likely tailored so our mini and junior players can take the lead.
Then, for me personally, I’m going to take a few days break, eat a few take aways and relax.
I want to keep up the running, so will be looking to get my first full marathon recorded in
the next week or so."

What Nathan has achieved in the past week is truly amazing and as a club, we are extremely
grateful for all his efforts. Throughout the week, with sponsor donations, as well as the kind
donations on his Just Giving page, he has managed to raise an incredible £4802. This money
will go towards making the Club House more accessible to the wider community with the
installation of a disabled lift and toilets.

If you would like to help increase his total, his Just Giving page will be open for a few more days.

It takes the effort of a few to inspire and release the kindling flame in others. That flame
then grows and turns visions into realities. It has hoped that Nathans example of being
inspired by others to make a difference and then making that a reality will be inspiration to
others in itself. What the club is trying to achieve is a legacy that will live on for many years
to come. It’s time to stand up get involved and be part of that legacy. On behalf of the Club I
would like to thank Nathan (and Tom Manson for showing the way) for his efforts for which
I am sure he will take great pride for many years to come.