There is evidence that iron production was going on in north Northamptonshire during the Roman era. Local low grade iron ore, and fuel supplies in the form of charcoal, came from Rockingham Forest, which covered much of the area. In the 19th century, several small iron making works were set up in the locality and during the economically depressed years of the early 1930’s, the tube & steel making company, Stewarts and Lloyds Ltd, opened a large new works, based on modern processes, at Corby, to make steel and steel tube from the local iron ore. 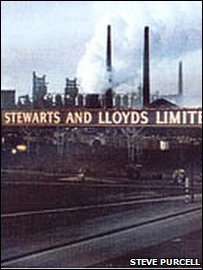 Due to the sheer size of the new works, Stewarts and Lloyds recruited much of the workforce from outside the region. A number of old works were closed in Scotland, Wales and the English Midlands, and the workers were encouraged to migrate to Corby. Stewarts and Lloyds built a housing estate to accommodate these workers and their families, and provided recreational facilities at the “Welfare” in Occupation Road. Sports sections were set up under the umbrella of Stewarts & Lloyds and many, like ourselves, still retain the name to this day.

Corby Rugby Football Club (later to be known as Stewarts & Lloyds) was officially formed in 1936, after the first match against Kettering in October 1935, and because Rugby was well established in Northamptonshire and the surrounding counties, little difficulty was found in arranging fixtures, though there was resistance shown by some to playing a “works” side.

The principle founders were two Welshmen and a Scotsman. Bert Green, Windsor Genner and Arthur Cooper – ‘The Three Wise Men’. During the Second World War, so many of the members were engaged in vital war work in the steelworks, that the club was able to keep playing rugby. Most of the matches were against forces sides. It is estimated that 16,000 servicemen played with or against the Club during the war period (servicemen were given selection priority over regular members).

In the 50’s, the Club boasted the finest 7-a-side team in the Midlands. In 1951/52, the 1st XV, captained by Arthur Savage, finished with an unbeaten record (P 30 W 25 D 5 L 0). Other team members included Bob Morrison (who went on to play for Northampton) and Tim Phillips. Sadly, Bob and Tim have passed away and will be sorely missed. During this decade, Vic Leadbetter played for the club, who later played for Northampton, Cambridge University and England.

In the 60’s, a team won the Langholm Junior Sevens – a prestigious Scottish Borders competition. In 1965, the club undertook its first foreign tour: a visit to Le Creusot – a fellow steel making town in France. We also began to play annual games against the other Stewarts and Lloyds teams at S&L’s Newport and Clydesdale works.

Construction of the Clubhouse occurred in 1965. Prior to this, players had changed in the cellars of the “Welfare”.

Birth of the Mini-Junior division

In 1972/73, Evan Martin and Keith James founded the Mini-Junior division. This was a major factor in the increase in senior playing strength, from two to four senior XVs, and formation of a Colts XV. The 1st XV were winners in succeeding seasons of the East Northants Cup and the Peterborough & District Cup.

In the 80’s, the British Steel Corporation, our then landlords, afforded us financial independence. Thereafter, the Club and British Steel signed a long lease for the clubhouse and 1st XV pitch. In 1983/84, Club members largely contributed to the installation of floodlights. On the playing side, the ‘highlight’ was perhaps when we hosted the East Midlands Final in 1984/85. Cruelly, we lost out to Peterborough thanks to an injury time penalty goal converted from the touch line! On a happier note, we celebrated our Golden Jubilee in the following year with, among other events, a memorable visit from Devonport Services, and the inauguration of our Floodlit 2nd XV Knockout Cup competition.

In 1991 we signed a 99 year lease for the clubhouse and 3 pitches. This secured our future at Occupation Road. The 1st XV continued to maintain its position in the League structure. In the 1998/99 season, the Colts were East Midlands runners-up. Five members of that team went on to play for the 1st XV.

The new millennium started well. We were twice runners-up in our league – our best position for several years. We narrowly lost to Ilkeston in the promotion playoff in 2000/01, and to Nottingham Moderns in 2001/02.

In 2013/14, the 1st XV became Midlands Champions, winning the RFU Midlands Senior Vase, the first East Midlands club to do so. The win meant a national semi-final against Yorkshire powerhouse Yarnbury RFC, with the winners progressing to a Twickenham final. Sadly, 10 points difference meant the dream was over. Following that match, the 1st XV secured promotion to Midlands 2 East, securing their place as the most successful side in the history of the club.

That same year, Northamptonshire Sports awarded the Club the title of “Community Club of the Year”. The award recognised the extensive work the Club does in the community of Corby and surrounding villages.