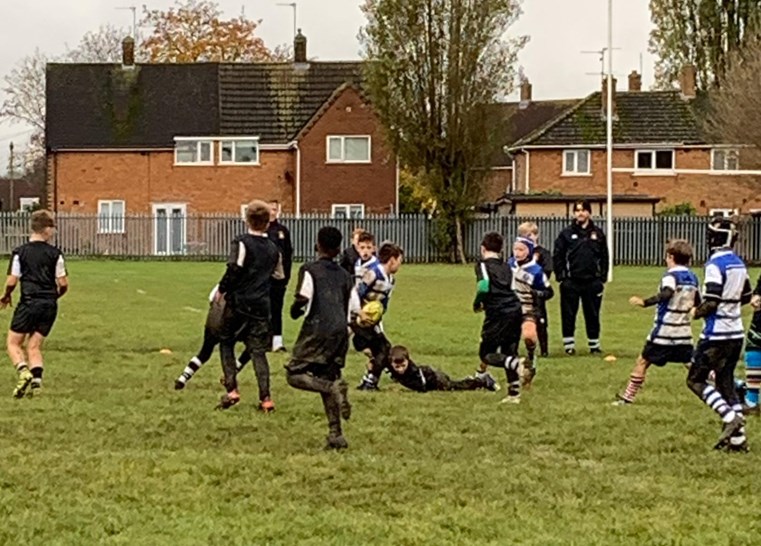 Our Mini & Juniors hosted local rivals Kettering as well as Market Harborough and Norfolk Crusaders. Here is how they got on:

On Sunday morning our under 7s played Kettering. With a great turn out from the players they fielded 2 teams. They are showing improve the every week and really enjoying their rugby. The players of the week were Cameron & Lucas

On Sunday we welcomed Kettering and Norfolk Crusaders to Occupation Road. The first game we struggled to get started and took a heavy defeat to a strong Kettering side. The second game was a little better but unfortunately we lost that game too. In the final game we woke up and showed a big improvement. Despite this however we narrowly lost to kettering. Our player of the week was Lewis.

S&L hosted Kettering for their first home game of the U11s season. Captain Noah Cole led his team against a well organised Kettering side in three matches, resulting in one draw and two narrow losses. Although the results didn’t go in favour of S&L, the boys battled hard at the breakdown and stuck to our game plan. They gave 100% throughout the morning, and we could not have asked for anything more from them. A great performance as they continue to develop as a team. Try scorers today Ashton Turney (3) and Tobi Salau (1).

S&L U12s welcomed local rivals Kettering to Occupation Road for their first home game of the season. After a strong start at Bletchley and the Kettering Festival the team were in good spirits and hopeful of a positive performance against a side who are traditionally one of the strongest we face.

Unfortunately, the heights of previous weeks were not reached and a tough day at the office ensued with a very well drilled Kettering team coming out on top in all 3 matches.

The boys tried hard throughout and improved as the games progressed, but (as with the RWC Final the day before) the stronger, better organised defensive unit won on the day.

Onwards and upwards to next week when we travel to Broadstreet for our first ever fixture against them!